I loved my wife, and I couldn’t afford a Corvette.  So, when it came time for my mid-life crisis, I decided to take up one of my old high school loves…. Archery.  I had shot competitively in high school, winning the State Intermediate Class (now Young Adult) field championship in 1967.  I loved my Ben Pearson Lord Sovereign target recurve with a Merrill sight featuring a simple ring-pin aperture for short distances, and a pendulum prism scope for long ones.  The bow had beautiful inlays and outlays.  I grew up on a farm in Northern Utah near the Idaho border.  I was an avid hunter and fisher as a kid growing up.  I shot pistols, rifles, and bows.  All my bows were Ben Pearson models, and I had an Old Ben, Filly, Colt, and Pinto.  It wasn't that I was infatuated with Ben Pearson bows, but that is what I could afford, and they were better shooting bows than many folks gave them credit.

I reloaded my own shotgun shells, fletched my own arrows, and was also an amateur taxidermist. I also played the trumpet in our JS and HS jazz ensemble.  It so happened that my friend Bruce who was the Bari Sax player in our jazz band was also the best youth archer in the state.  It was Bruce who convinced me to join him in competitive target archery.  I upgraded to the BP Golden Sovereign Lord Sovereign target bow.  Bruce and I enjoyed many tournaments together.  The summer after my junior year in high school I won the Utah field championship in the Intermediate (now young adult) class.  I kept shooting, but only recreationally, through college and into the 1980s. I never never got into compound bows until Y2K.

When I left competitive target archery in 1969, I had never seen a compound bow.  A new invention called a “release” was used by a few shooters, but most were a one piece wood carving that had a notched area for the string, and the release aide was twisted to loose the shot.  Needless to say, when I decided to get serious about archery again 30 years later in Y2K, I was amazed at the changes that had taken place in the sport.

The biggest change to me was the compound bow.  It seemed like everyone shot one, using a release aide. I wondered what had happened to all the traditional shooters.  However, I had always had difficulty pulling and holding a recurve (even at 35 lbs) throughout a tournament without getting fatigued.  So I thought I would do really well if I could actually shoot a 55 lb. bow while holding only 24 lbs. of draw weight (boy was I mistaken).  Thus, I ventured into the world of modern compounds.  I figured I would buy a used compound before spending big bucks on a new bow.  I stayed with brands that were familiar to me, Hoyt and Easton. I bought a used Hoyt compound target bow on Ebay for $150 and some Easton 2117 XX75 practice arrows.  I made a few mistakes, such as buying a two-prong rest (Golden Key Platinum Premier) instead of one better suited for finger release (I now use a Cavalier Elite with a Beiter plunger).

Next, I tried to find an archery club to join.  It actually was not easy finding a club. Nothing was in the Yellow Pages, and little on the internet (which is one reason I volunteered to develop the Skookum web site).  After visiting a few sporting goods stores, I found an area archery club that had a large range.  On my first visit, I joined the club.  I watched our local experts shoot quite a bit, and found them more than willing to update me on the sport.  Being somewhat of a traditionalist, I decided to stay a finger shooter. Also, there was so much competition in the freestyle class that I knew my only chance to compete would be in the freestyle limited class.  No, I go back and forth between compound and traditional recurve.

In my view, the biggest change in archery over the past 30 years has been the advances made in bow technology, and the preference for 3D shoots.  In the old days, all I had to do was string the bow, check my arrows, and go shoot.  Today, there are so many nuts, bolts, screws, rods, cams, modules, etc. to keep tightened or tuned, that it seems to detract from the enjoyment of the sport. Personally, I think too much time is spent on tuning, and not enough on shooting form. I suspect many people who try archery get discouraged from trying to keep all the high tech gadgets turned, and miss out on the pure joy of shooting.

What hasn’t changed much in 30 years is proper archery technique and shooting form. I have noticed a few changes in philosophy and technique.  Perhaps the biggest change I have observed is the preference for a low wrist grip on a narrow riser (to reduce torque). 30 years ago, the preference was for a medium or high wrist grip on a riser that was molded (or carved) to fit your hand.  As a teenager, I had experimented with kisser buttons, clickers, mirror checks, finger slings, stabilizers, and a variety of peep sights.  These are still around, although I haven’t seen anyone with a little mirror mounted in the sight window (to check draw length). Don’t think they are allowed any more.

Archery has enjoyed considerable growth because of the advent of the 3D shoot.  In the  1960s, our state archery clubs would have doubled in size if someone had invented an affordable 3D target back then.  We thought a paper NFAA Animal Round was pretty realistic and fun. We would have gone crazy for 3D.

Our local pro shop helped me pick out the right new bow setup for me.  Shot execution is pretty much the same as it was 30 years ago.  At least for some aspects of archery, the more things change, the more they stay the same.  And thank God for that. There are enough changes in archery as it is.  Besides the existing bows I owned, I began collecting additional vintage recurve bows in 2005.  I still like to shoot and have won around 20 state championships over the years in FSLR, FSL, and BHFSL styles. I've taken a 1st, 2nd and 3rd place at the NFAA Marked 3-D National Championships at Redding CA .  Lately, however, my scores have dropped considerably as "old age" has begun to catch up with me.

Now that I’m semi-retired I've decided to give back to the archery community by developing this consolidated website dedicated to the golden age of archery. I've also reconditioned a number of bows from my collection. I hope you find the site helpful in your pursuit of the great sport of archery. 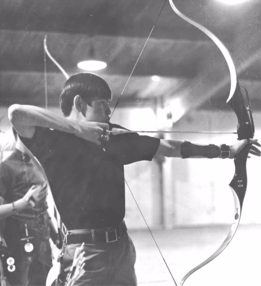 The domains TraditionalArchery.Net, VintageArchery.Org, and ArcheryHistory.Org are a consolidated website dedicated to archery history and remembering, preserving, and maintaining traditional archery. The site has a special focus on the Golden Age of Archery, which I have somewhat arbitrarily designated as 1955 through 1975.  While the content of the site is not limited to the "Golden Age" of archery, a primary focus is on those two decades where traditional bows not only made great technological advances beyond the typical "stick and string", but also became sculptured works of art.  This West coast "hobby site" is dedicated to preserving and disseminating information about traditional archery specifically, and the great sport of archery generally. Check out the many articles in the library section.  This site not sponsored by any company. I also have a personal collection of traditional recurves, many of which are currently offered for sale on the site.  I hope you find the site a valuable addition to the archery community.  Unfortunately, I do not have the time to help you identify that bow you just bought at a garage sale or on eBay. However, if you have information to contribute, feel free to send it to morrisondon@comcast.net. Thanks, and good shooting.  Don Morrison

About our Traditional and Vintage Archery Site 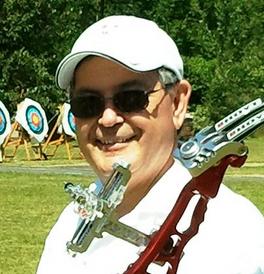