Popular Root Bow Models (From most to least expensive by category) 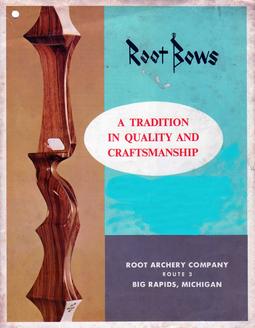 Ernie Root began his bow making career working at Indian Archery in Chicago in the late 1940s. Ernie, a gifted bowyer, left Indian and started his own company Root Archery in the early 1950s as a family business in suburban Chicago.  His success in the archery business lead his to seek a larger facility, and he moved his operation to Big Rapids, MI.  Ernie was also a good tournament archer and set a tournament record that lasted for 12 years. His success as a tournament archer helped build and promote his Root brand.

William Shakespeare, Jr.  had patented his fishing reel, and began producing fishing equipment in the late 1800's. In the 20th century, Shakespeare expanded to become a major producer of sporting equipment. In 1959 Shakespeare Cooperation acquired Parabow, an Ohio-based maker of archery equipment that was incorporated into Shakespeare's Archery subsidiary. Parabow was one of the main producers of solid fiberglass bows in the 1950.  In 1959, along with the Parabow line, Shakespeare introduced the 100 through 400 series of recurves. In the early 1960s Shakespeare began a collaboration with Ernie Root.

Root Archery had been a supplier to Shakespeare for a number of years. He had sold a number of his bow designs to Shakespeare. Some of the designs were modified and renamed. The Root Warrior became the Necedah, the Brush Master became the Kaibab, and the Field Master became the Ocala. The first bows of this type bore the name "Root, by Shakespeare". Shortly afterwards, around 1969, Ernie Root sold his company to Shakespeare and went to work full time for them.  The Root name was dropped completely but his design influence would continue. After the merger to Shakespeare, Mr. Root was became consultant and production manager (as part of the Root sale agreement). Notwithstanding his full time job as Shakespeare’s production manager, Ernie also continued producing his own line of bows on the side under his "ROOT" name even though the business had been previously sold to Shakespeare.

Owen Jeffery, an inventive and talented bowyer was hired as President of Shakespeare Archery with a directive to “revitalize” the brand. Before He came to Shakespeare he was Master Bowyer and a Vice-President for Bear Archery.  He moved the Shakespeare's Archery operation to Columbia South Carolina. Ernie was not interested in moving to South Carolina, and his contract had a clause that could not make him leave Michigan. It appears the move from Big Rapids, MI to Columbia, SC in 1971 was a failure.  Whereas the factory in Big Rapids was efficiently run and employed many skilled craftsmen, Shakespeare tried to run the plant in SC with cheaper lesser skilled workers, and without Ernie Root to oversee production.  It didn’t work well, and the quality of the Shakespeare line suffered.  Ernie, meanwhile, devoted his time to developing the metal riser take-down (Golden Eagle) with a bowyer named Phil Grable. 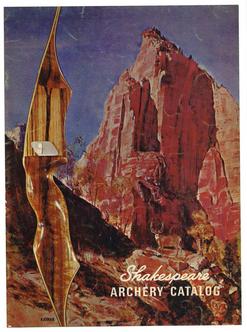