The Black Hawk Archery company was founded around 1950 by the three brothers: Charles Sr., Cosimo, and  James.  Charles Sr. was a physician and not directly involved in operation of the business.  Charles Jr. worked for the company for a time in the early 1950's until joining the military.

On founding the company, Gale Knott and his brother, two native Ojibewas were hired to help promote and demonstrate the bows.  Family friends of the Cravottas, the Knotts were operators of a fishing guide service where the Cravotta's vacationed each summer.  Charles Jr. and the Knotts would shoot demonstrations of the bows at local rod-gun clubs, shooting #70-#90 bows.  Charles Jr. preferred the Blackhawk Hornet and would shoot broadheads into a bullet hole fired by a Winchester rifle to demonstrate accuracy.

The first models of the Black Hawk bows included the Chief, Warrior, Hornet, and Wasp.  These models were produced for many years in various styles as times changed. Later, the higher end King and Queen models were added.   Black Hawk bows enjoy a reputation as good shooters.  The Black Hawk all-purpose or entry level bows were often named after insects, such as the bee, yellow jacket, mosquito, or scorpion. In the mid-1960s Cravotta also produced the “Galaxie” line of bows.  Their 1963 and 1964 catalog also included a line of water skis and misc. water skiing accessories.  Cravotta also built bows for the Red Head company which was later purchased by Bass Pro. The Galaxie line featured the high-end Apollo and Venus tournament bows, as well as the Titan, Lord, Saturn, Jupiter, Mars, Vulcan, Neptune, Pluto, Nike, and Ceres.   In the early 1970s, many of the Galaxie bows were merged into the regular Black Hawk line, including the Apollo, Titan, and Lord. 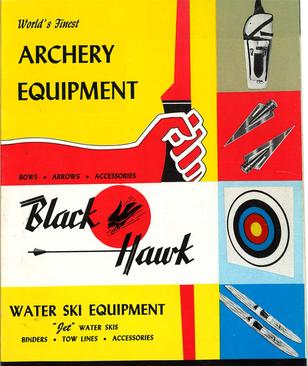