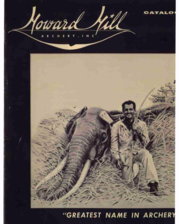 Howard Hill was born November 13, 1899 in Wilsonville, Alabama. He would later become known as the "World’s Greatest Archer".  Howard began shooting the bow and arrow at an early age. Although his youthful interest included the usual round of indoor and outdoor sports, his first love throughout the years was always archery.   Howard Hill played baseball, basketball, football, and golf as a home town hero at his high school in Wilsonville Alabama. In 1922 he married a former English teacher from high school. Hill attended Auburn University, where he played football and basketball.  He also played semi-pro baseball on the side. He also focused on golf again. It was reported that he was not a great putter, which stifled his dream of becoming a professional golfer. Subsequently, he decided to concentrate on shooting his old long bow and try his hand at field shooting competitions. In 1928 he wrote the first set of rules for archery golf.  Hill won many field archery tournaments, and twice was the National Flight champion. He is reported to be the only person to ever win 196 archery field tournaments in succession.

Hill would also entertain people by doing difficult trick shots like shooting an apple or even a prune off of something as far as sixty feet, and then would sometimes top that by shooting at an even smaller target from the same distance or maybe even longer.   He was a great self-promoter. He put out several short documentaries on archery, often featuring himself performing other trick shots like shooting a flipped coin from a distance or splitting a rolling ball made of wood. He would also sit on the ground and push his bow with his feet while pulling the arrow back; even from this position he was able to hit the bull's-eye.

He excelled in all branches of archery -- Flight, target and field. But it was his remarkable success as a hunter that most distinguished him from other famous archers in history.  Through the 1930's and 1940's many movie shorts were made showing Hill’s prowess with a bow and arrow. Saturday matinees often featured Howard hunting many North American big game, as well as his famous trick shots that included hitting aspirins in the air or other type of moving targets.  In the famous 1938 film Robin Hood, Howard Hill served as Errol Flynn’s stunt double.  During the filming, Hill made one of the most famous shots in history as he (as Robin Hood) split a target-embedded arrow with his own – known to this day as a “robin hood”. (Note: The splitting of the arrow story is refuted by another stuntman on the set, Buster Wiles, who said that although Hill had split the end off of several arrows, he had been unable to split the arrow exactly as scripted (from end to end), and finally a specially constructed arrow with a large bladed head had been used, shot along a concealed wire).  While on location in Africa during the filming of the movie Tembo (circa 1968), he not only successfully hunted and shot lions, leopards and other wild animals of the jungle, but his most sensational exploit was killing a full-grown elephant while armed only with his bow (115#-125# draw weight - opinions vary) and a single broadhead.

During his career, he produced 23 films about archery for Warner Brothers. He also shot 10 different movies of his own, and was a technical adviser in far more movies, providing his expertise in the field.  In his book Hunting The Hard Way, Hill revealed many of the techniques that helped him become a great archer.  It was one of the most read archery and hunting books of the 1950s.  Howard Hill’s exploits with the bow enticed many boys in the 1940s and 50s to take up archery, just as Jennifer Lawrence’s Katniss Everdeen character began to do for girls with the Hunger Games movies from 2012-2015.

In the late 1950s, Ted Ekin and Dick Garver decided to open an archery shop in California. A few years later, Dick met Howard Hill at a meeting regarding a highway project. The Garvers and Ekins became friends with Howard Hill, and as part of their archery shop started to sell Howard Hill Productions equipment designs.  Hill had never really been a commercial bowyer.  He had built his own bows and a few for friends.  In 1960, Howard Hill Productions was incorporated as Howard Hill Archery, Inc. and was moved to Sun Valley, CA.  Their 1961 archery catalog was almost a bio and promotion of Howard Hill the man.  Ekin, Garver, and Hill all held shares of stock in this new venture. This adventure fell through however, in 1962, but the Ekin/Garver archery shop in California kept selling Howard’s equipment.  In 1968 Ted and Betty Ekin sold their interest in the archery shop but retained the rights to produce and sell Howard Hill Archery equipment. They moved to Hamilton, Montana, and with advice from Howard, started the Howard Hill Archery business.  Ekin’s son Craig took over the business in 1979.  At first they did not build their own bows, but contracted with other bowyers.  In 1982 Craig Ekin began crafting all of their own bows.  They remain in business today as Howard Hill Archery.

Howard “retired” from active archery in 1952 at the age of 56.  Hill contracted cancer, and passed away on