Fleetwood Archery began in 1928 when Clarence Love turned his passion for archery and the building of bows into a full time business. The original office and workspace for Fleetwood Archery was in the kitchen of their small home in Denver, Colorado. Clarence was soon joined by his wife Irma, and together they grew the business quickly with many new ideas and products that weren't available at the time. Soon they moved the business out of the kitchen and into a small warehouse where they built longbows and recurve bows, fletched arrows, and manufactured quivers, armguards, gloves, tabs, fletching tools and even broadheads. Clarence and Irma were also competitive archers and traveled all over, selling their goods and shooting with many of the elite archers of the time. Their shooting buddies included people like Fred Bear, Earl and Ann Hoyt, Ben Pearson, and many more.

Fleetwood sub-contracted with the A.R. Amundson Products Company of Superior Wisconsin to make some of the items that were not made in the Fleetwood shop in Denver. Fleetwood, either on their own or through their contract with Amundson, manufactured all of their archery products which were distributed throughout the country by hardware and sporting goods jobbers.  They also did direct catalog sales.

In 1959 the Loves sold Fleetwood archery to the Outers Labs of Onalaska, WI.  Around 1970 Outers Labs acquired Amundson Products and merged the operations. While the 1963 catalog still listed Denver as the Fleetwood Archery headquarters, the 1968 catalog listed Superior WI as the headquarters.  Amundson Products had two factories with a combined 20,000 square feet of space.  The 1970 catalog lists Fleetwood as part of Amundson Products, whereas the 1971 Fleetwood catalog is listed as Outers Fleetwood Archery. Outers moved parts of the Fleetwood operation to Onalaska and manufacturing arrows, strings & some of the low end bows there.  Outers then acquired Astro Bows Inc.  The Astro line used some of the old Fleetwood tooling that had been used to make their recurve bows.

After the Loves sold Fleetwood to Outers, Clarence, with the help of his son, Don Love, started a new retail archery store, Denver Archery.  Drawing from their extensive experience and tenure in the archery community, they had plenty of insights and ideas about what was missing in the retail archery world.  Their efforts grew into a company named Western Archery which included the Vista archery products line.  The company eventually became Western Recreation. In the late 1980s, the Loves’ were able to reacquire the Fleetwood Archery brand name, and it has served the growing youth, recreational and traditional archery market ever since.  Several additional brands have joined the Western Recreation family including Outdoor Decals, SkulGear Hats and DuraMesh Targets. 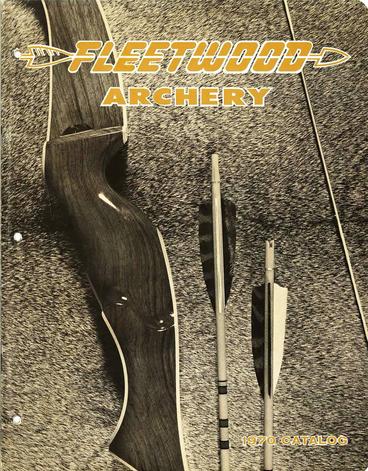