BACK
NEXT
Visit the American Archery History Page 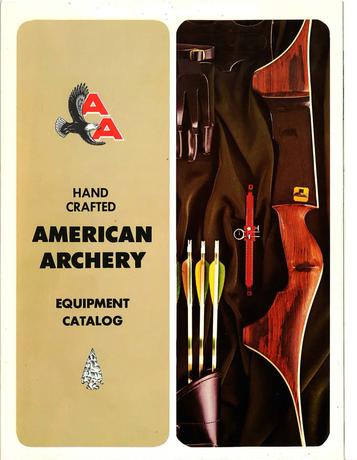 Not a lot is known about the American Archery Company, although those in the know consider their bows to be of high quality, which was reflected in their pricing.  Early on the Company was located in Clarendon Hills, Illinois from the early 1940s. Ernie Root (Root-Shakespeare) was a part owner of American in the early years, left during the war, and then returned after WWII until he started his own line of Root bows.  The company changed hands several times. Around 1968 it was bought out by an investment group and moved to Oconto Falls, WI.  While American Archery catalogs are hard to come by, American frequently placed display ads in the various archery magazines of the day during the 1950s and early 1960s (search our magazine section descriptions for American bow ads).

In 1956-57 the first, and only, bow made by American was the Cheetah. it came in both target and hunter lengths. The Cheetah remained the most popular American bow model. American later made the Cheetah Supreme, a high end target bow (pictured on the catalog page to the left) priced at $135 (imported hardwoods) or $160 (Rosewood) in 1965, and a Cheetah Hunter's Special at $74.50, and a Cheetah Standard at $55 (64" model).

As compound bows began to taken over the archery landscape, American dropped their target recurve line, but kept several of their hunting and all-purpose recurve models.  The 1976 catalog lists 2 compound models, the aluminum riser Penetrator, and the wood riser Am-Mag.  They also kept a line of hunting and entry-level recreational bows, including the Cheetah Hunter Special, American Hunter, Shortie (48" bow), Mark II, Varsity, and the Young American.