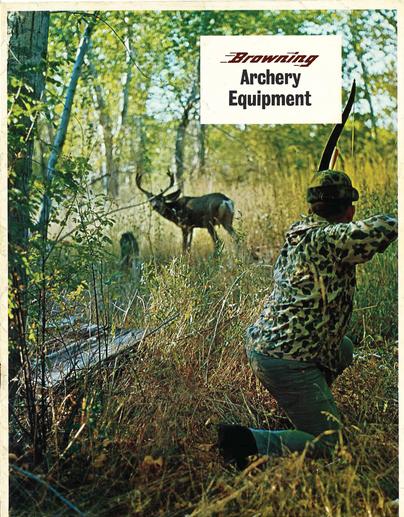 Although Browning has been around for a long time, there is little actual information we have been able to gather about the history of Browning's archery line.  John Moses Browning and family operated a shop and rifle making works in Utah during the latter 19th century. A prolific gun designer, but unable to produce products in any quantity, Mr. Browning would shop his designs to US and European manufacturers in return for royalties or to produce the product with the Browning name. John’s family heirs continued this business strategy of other companies producing Browning labeled products, and with a quality dealer network and a “best quality” reputation, the company prospered, sometimes venturing into fishing gear and archery.  In 1962 Browning purchased the bow making operation of Gordon Composites in San Diego. Browning bows were built from 1962 through 1975, initially in a facility in San Diego from the Gordon (plastics) brothers.  Browning later moved production to the Browning's Utah headquarters.

Harry Drake, a noted California bowyer, archer and bow designer played some role in the initial design of the Browning bow line. It is unclear as to who served as the chief bowyer(s) for Browning bows over the years. The traditional bows were sold through Browning’s established network of sporting goods dealers from 1962 though 1975.  Browning's marketing strategy was to appeal to rifle hunters to expand their hunting experience into bowhunting. Browning bows are well designed and enjoy a reputation for quality.  They are considered good shooters, both in terms of speed and forgiveness. Browning sold a full line of target and hunting bows, arrows, and archery accessories.  The initial 1962 bow line included the (from most to least expensive): Olympian, Trophy, Safari/Explorer, Apollo, Diana, Normad, Medallion, Spartan, Mohawk, and Apache.  In 1966 Browning added the high end Challenge target bow. In the late 1960s Browning added the Monarch mid-range target bow, and popular Cobra hunting bow, as well as the Wasp.  The Fury model was added in 1972.  Take downs and the first compound was introduced in 1974.  The final 1975 Browning archery catalog featured 3 compound models, one takedown model (The Cam-Lock), and the Explorer, Cobra, and Normad Staker, as well as the entry-level Rover, Wasp and Mohawk recurves.