Bear Archery was founded by Fred Bear and Charles Piper in Detroit Michigan in 1933 as the Bear Products Company.  The initial focus was on silk-screening and advertising support work for automotive companies.  In 1938 Bear hired Nels Grumley, a woodworker and bowyer, and the company expanded to offer hand-made bows.

Fred Bear sold the advertising side of the Bear Products Company in 1940 to focus on archery. The archery business was renamed Bear Archery. In 1947 the company moved to a new facility in Grayling, Michigan. The Grayling plant focused on making and marketing recurve bows and longbows.  After observing Ben Pearson’s successful efforts to machine make bows, Bear changed from hand-made bows to mass produced bows using fiberglass and other modern materials.

Automation did not sit well with Grumley, Bear’s principal old-school bowyer. Grumley knew that mass producing bows by machines instead of individually crafting every bow by hand was not what he wanted, and despite Bear’s attempt at retaining him, Grumley left Bear in 1948. After Grumley’s departure, Bear began using the famous “Running Bear” decal.

Fred was an avid hunter and promoter. By traveling the world and producing films about bow hunting, Bear’s name and face became famous among archers and hunters. Bear was hands on with design, development and manufacturing processes at his company.  Archery equipment was carefully examined and tested by men who had expertise in bowmaking, and many years of experience in the industry.   Bear obtained a patent for something called “Glass Power” which was Fiberglas strands bonded together and running full length on every bow.  Skilled workmanship, top quality material and precision machines resulted in a high demand for these well-crafted bows. Bear’s various models of the Kodiak bow became best sellers, and are still highly valued today.

Fred Bear sold the company to Victor Comptometer in 1968, but remained president. From 1968 to today, Bear has changed ownership a half-dozen times. It is currently owned by Escalade Sports. 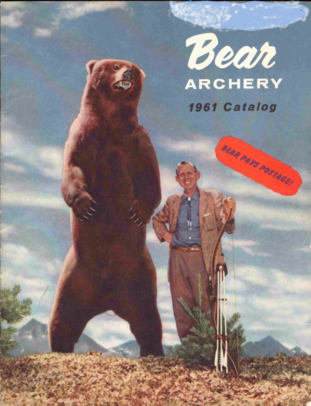 NEXT
View on Mobile