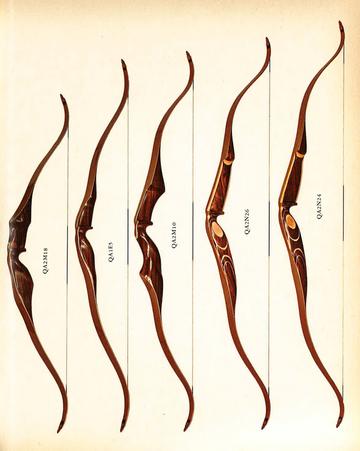 George Herter was born May 24, 1911 and grew up in an outdoor life with hunting and fishing in Waseca Minnesota. He always wanted to open up his own store as his dream and eventually he got the opportunity to found Herter’s outdoor goods. In 1937 Herter took his father’s dry goods business and turned it into his own mail order outdoor goods store. He sold hunting and fishing items through a catalog and later he opened retail stores which inspired stores like Cabelas and Bass Pro Shops.
Herter’s became well known as the largest sporting goods (hunting, trapping, and fishing) mail order company in the world. They manufactured nearly all of their own hunting and fishing equipment.

At first, Herter’s made only solid fiberglass bows.  In 1961 Bob Barrie was appointed head of the Herter’s Archery Division, and they started Herter’s own laminated bow production as well as arrows and various other archery accessories.  Barrie worked closely with Herter making molds, grinders and other production equipment. In a short time they were making as many as 80 recurve bows a day. Production of arrows, broadheads, bowstrings and various accessories soon followed. Barrie headed the Herter’s Archery Division from 1961-1979.In 1975 George Herter sold the business to Cabelas, including their highly coveted their foam decoy factory and patent. The result was the downfall of the Herter’s company. In 1981 Herter’s filed for bankruptcy and went out of business. The Herter’s name is still used on several Cabelas products today.

Herter's bows were relatively inexpensive and considered a good value.  1966 prices ranged from a high of $79 for their 72 inch Premier rosewood target model, with a price range of $34 to $54 for most of their other models.  The bows performed well, especially for the price.  Herter's bow models varied from many of the other archery companies, which often copied each others designs, especially for best sellers. Herter's bows had a unique design,  but relatively attractive.  Risers were made of Maple and/or rosewood.  Limbs often had tan backing and black facing. Herter's had a trademark "desert tan" limb fiberglass color that was unique to Herter's bows.  Herter considered this to be a good camo color. Herter's used a thick shiny expoxy on their risers.   Herter himself was a grandiose promoter, so most of his bows were given the name Model Perfection.....Turkish, Magnum, Sambar, Premier, Imperator, etc.