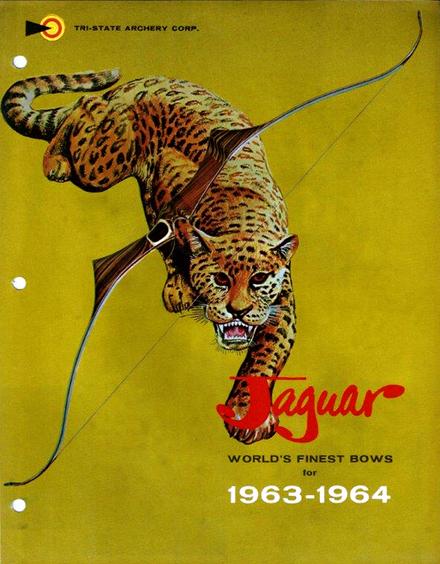 Tri-State Archery began in the North-East serving a 3 state area sometime in the mid-late 1950s. It later sought a more national market and rebranded the company as the United States Archery Company (U.S.A.C) around 1963. Tri-State and U.S.A.C. bows were made in the company factory in Danbury, CT.  It is believed that Larry Owens owned the company and Louie Owens was the principal bowyer-designer. Tri-state had also manufactured woven fiberglass for the bows, called Owen's PermaGlass.  Tri-State was one of the first bow companies to offer true center-shot bows in all of its models. Its early top line model was called the Jaguar, and Tri-State names most of its models after animals, such as the aforementioned Jaguar (made in both shorter hunting lengths and longer target lengths), the Lynx, and the Wildcat. They also made a Turkish model bow.  When Tri-State rebranded and expanded into United States Archery sometime around 1963 (some 1963 magazine ads used both names in the ad) the expanded bow models were given names of states. Models included (from high to low end) the: Hawaiian, Californian, Kentuckian, New Yorker, Pennsylvanian, Floridian, Virginian, and Texan.  However, the company kept the original three Tri-State models in the line (the original flagship Jaguar, the Lynx and the Wildcat.  Several of the U.S.A.C. models were very unique and distinctive, especially the Jaguar and the Hawaiian.  Like many companies, U.S.A.C did not try to enter the compound bow market, and when compounds took over the archery world, U.S.A.C. went out of business, although the exact date is unknown.

BACK
NEXT
View on Mobile