Ben Pearson made his first bow and began practicing with arrows he had made. He entered the Arkansas State Archery Championship in 1926 and came out next to last. He went back and built better equipment and in 1927 he won the Arkansas State Championship. He begin making archery equipment for other archers in the area. He was successful but realized that making archery equipment by hand was slow and expensive. He wanted to be able to offer quality affordable bows to the masses. He designed machinery to mass produce archery equipment, but the country was in a depression and funding was hard to find. When Ben Pearson met Carl Haun, an oil man with an interest in archery, Ben got the financing he needed to begin Ben Pearson Inc.  His first catalog in 1938 had only arrows in it, and Ben's initial claim to fame was as an arrow maker.   By 1941, however, he was making several bow models.  Before 1958, Pearson bows had only a model number. In 1958 bows were given names, such as Cougar, Javelina, Mustang and Pinto. In 1961 the high-end Golden Sovereign line was introduced to go along with the elite Palomino in the regular line. By 1963 the average daily output was 3,000 bows and 3,000 to 4,000 doz. arrows. In 1967 The Leisure Group acquired Ben Pearson Inc., and the Golden Sovereign line was dropped. Click here for more information on Ben Pearson and his company. 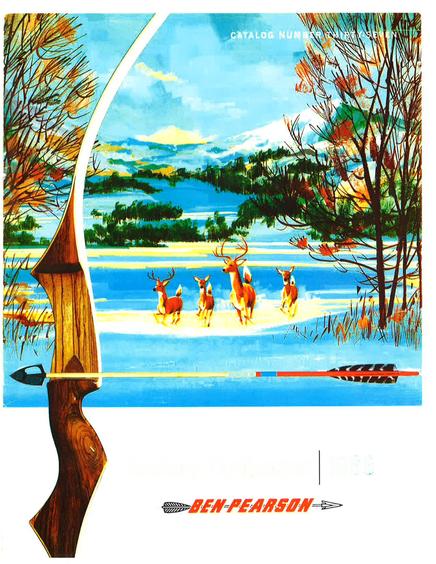