Harold Groves started building bows as a young man Illinois, years before he was recruited to work in Los Alamos in 1951. In the early 1950s, as Los Alamos physicists and engineers worked to develop the hydrogen bomb, one of the machinists was working during his off hours with his own  device – a recurve bow. Harold Groves, who later told his story to New Mexico writer, guide and bow hunter Slim Randles, told him that: “Every Friday afternoon the scientists would get together over coffee for an hour to relax and work on a fun project,” Randles said. The informal get-togethers had been started by Robert  Oppenheimer, the father of the atomic bomb and scientific director at Los Alamos.

“They all knew Harold was making bows,” Randles said, so one day the scientists decided apply some modern theory to the ancient technology of bow and arrow. For two Fridays in a row, Groves told Randles, they talked and calculated and theorized. Then they presented Groves with a set of plans and said, “This is how you make a faster bow.” At the time, Groves’ recurve bows were one piece with laminated wood and fiberglass limbs, Randles said, but the scientists found the layers were too thick and the limbs too wide. Based on their specifications, Groves then built a new 50-pound bow. When he fired it the first time at his usual hay-bale target 30 yards away, “the arrow flew 5 feet over the top.”  The Groves Spitfire bow was born.

Though Groves always gave the Los Alamos scientists credit, Randles said. “He would say, ‘I’m not that smart.’” The Los Alamos bowyer continued to improve his bows, and in 1959 quit his job and moved to Albuquerque. Groves had already patented a key part of the process – prestressing the limbs. Using a press to form the curves, Groves was able to build bows that became world renowned for their speed and accuracy. With a 114-pound bow, Groves himself set the world record for distance, shooting a broadhead arrow 444 yards from a standing position – a record that stands today, Randles said.

Groves made a beautiful traditional recurve bows, the most famous of which was the Spitfire.  When Harold started making bows originally they were works of art with risers of rosewood, zebrawood, ebony and various colors of fiberglass.  Most of the Groves bows were made with Rosewood risers and maple glass laminate limbs Grove bows were known for their speed and quality. His bow limbs were labeled as “Dyna-stressed”, which referred to his limb patent and was named after his wife Diana. One of the unique characteristics of  a Groves bow was that because of the technology of the limbs, a person could flex the limbs while the bow was strung, which is thought to be why the bows shot faster at the same draw weight than any other current recurve of the time.

A Groves doesn’t feel like a normal recurve, Randles claimed. It actually feels like it draws easier as the string is pulled. “The last few inches are fairly light,” said the 70-year-old Randles, who will shoot his own Groves bow at the National Senior Olympics later this month. “The result is the closest thing to a compound bow without being one. They’re amazing to shoot because they’re so smooth.” Groves had a manufacturing plant in southeast Albuquerque, but in 1965 constructed a 14,000-square-foot plant in southeast Albuquerque, but in 1965 constructed a 14,000-square-foot plant and state-of-the-art indoor archery range on San Mateo Northeast that made the business pages. According to a 1968 story in Sports Illustrated, the shop built as many as 500 bows a month, including a three part, take-down recurve. Bill Clark, manager of the Shooters Den in Albuquerque and a longtime friend of Groves, called him a genius. Groves eventually won six patents for his inventions, including an aluminum arrow straightener and a take-down bow (and a take-down ski, as well).  And when the first compound bows came out in the late 1960s, Clark said, “They didn’t hold a candle to Harold’s bows. His recurves would shoot over 200 feet per second.”  Clark would later use a Groves bow to win numerous shooting competitions and to kill his record-book elk in Socorro County.

Groves recurves swept competitions around the world, but in the 1970s the compound bow overtook the bow market and recurve sales plummeted. By 1975 Groves sold his business and retired. He liked to say, “I built 300,000 bows and broke even.” He didn’t stay retired, however. In 1985 he reopened business as Bows Unlimited, a shop and indoor range in the North Valley, and began making custom bows and giving advice to bow hunters and target shooters.

In addition to his bow inventions, Groves also gave New Mexico bowhunters a long-lasting gift. When he first started hunting here in the 1950s, there was no separate season for archers. Groves kept pestering the State Game Commission for a bow season, but they refused, saying bow hunters couldn’t hit anything anyway. Randles said Groves took a bow to a subsequent commission meeting, set up a matchbook as his target, paced off 40 yards, and with the commissioners looking on, hit the matchbook dead on. He got his bow season for deer and bear, and eventually separate archery seasons for most big game species. Harold Groves passed away in 1997. He was 76. His obituary called him “the father of bow hunting and archery in New Mexico.”  His son and foreman kept the business for about a year before closing it. 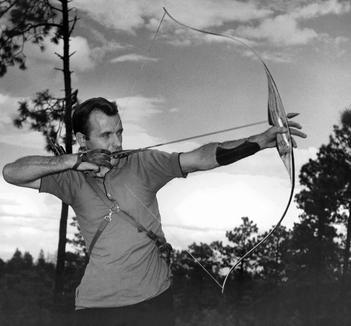