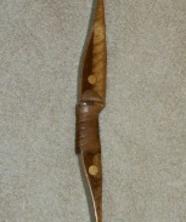 Lloyd F. Eddings of Marquette, Iowa was a skilled cabinet maker and carpenter. He became an archery enthusiast during his thirties. He participated in several local tournaments, and was also somewhat of an archery historian. With his background in cabinet making, he started building his own bows. Then his archery friends asked him to make them a bow. This was the 1940’s.  In 1945 he was making both cabinets and bows in his shop in McGregor Iowa.  He became so busy as a bowyer that he set up the  Eddings Archery Company in 1950 and called his bows Eddings “Super Cast”.  At first it was mostly a mom and pop business, but due to the success of his bows, he began hiring additional helpers in 1952. His bows were popular in Iowa, Illinois, and then spread throughout the Midwest and entire U.S. as Eddings began advertising in national archery magazines. According to the McGregor community history, at its peak, Lloyd employed as many as twenty-six people in his business.

While Eddings was a expert woodworker, he wasn’t an experienced bowyer per se. Eddings hired George Birnie to be his master bowyer in 1954. Prior to that, Birnie had served an apprenticeship with Richard "Dick" Galloway - credited with being the maker of the first "composite" (glass) bow in 1948. Birnie was a Scot who also worked for others for a time and built bows under his own label (Tex-tox) before returning to Scotland to build Royal Scot bows after Eddings was killed in a plane crash and the company closed. Birnie’s bow enterprise morphed into Border Bows which still exists and whose bows and limb design (with Eddings/Birnie roots) are highly thought of today.  In '73 Birnie returned to the US as the master bowyer/designer for Ben Pearson and the '73 forward Pearson bows were Birnie designed with what was sold as innovative deflex/reflex recurve limbs.

Eddings had several models of his “super cast” bows, among them the:

The Sphinx was his top bow. Then the Fireball model.  The Scout was his entry-level bow. His better bows all have a 3/4 inch hole drilled above and below the handle with a maple dowel inserted. This was more or less a trademark of his bows. That was a carryover from his cabinet making days. This unique riser feature makes an Eddings bow easy to spot. They were good shooting bows, but the big recurves were a little finicky to handle. Eddings bows had a reputation for speed and distance.

His bows deserved the title Super-cast, and had he lived, the bows would probably be both highly regarded and widely known. It is not known how much of the actual bow design belonged to Eddings and how much to Birnie. The Eddings bows were innovative for their time. Eddings called his design a semi-static recurve. They out-performed most bows of their day, and are still considered good shooters.

Eddings bows, at least up to 1952, were made with Conolon backing, maple core and  Toxwood, or Flight Tox face, depending on weights of bow. At that time they made hunting and field bows up to a draw weight of 85#, and target bows up to weights of 50#. Eddings did offer a catalog in 1952 but you had to write in for it. He placed display ads in the NFAA Archery Magazine in the early-mid 1950s.

All his bows had Super Cast on them. They gained a reputation for the speed and distance they could shoot an arrow. The Eddings got its well-deserved Super-Cast speed reputation in a combo of limb taper along with the minimal deflexed upright limb angle. Arguably, the Super-Cast isn’t a fully working recurve since the laminations get a little thicker out at the tips, sort of a disguised static-tip. Lloyd called his bow limbs semi-static recurves. Consistent with many other bows of the 1950’s, particularly Bear models, Eddings bows had nice slender risers and limbs, and an big recurve.  Accordingly, there was quite a bit of hand shock (kick) to them but they were fast.

Lloyd Eddings was killed in a plane crash July 3, 1961 when a wing of his home-made airplane came off. The accident happened during the plane's final test flight, which was a dive with full load. It had previously passed all C.A.A tests.  The Eddings Archery Company closed after his death. Birnie returned to Scotland to build his own line of “Royal Scot” bows. 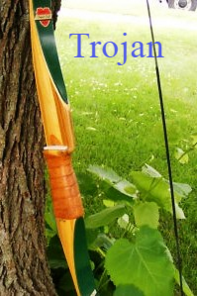