We welcome donations to our catalog collection. Contact info@vintagearchery.org. 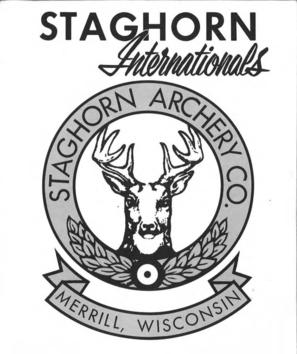 Staghorn Archery was founded by William (Bill) and Elinore Pyle in Ridgewood, New Jersey after World War II - reportedly 1951.  Bill had been a fighter pilot in the war.  In 1957 they relocated to Merrill Wisconsin and opened their archery shop. They offered 5 different types of bows comprising 23 different models adapted to various shooting styles world-wide.  William’s grandfather had been a successful bowyer in Belgium and taught his son the trade, who passed it on to William. Like many early bowyers, Bill began making bows for himself and friends.  He was not happy with the offering of bows on the market, so he started using more exotic woods than the standard Walnut and Maple bows of the day. During the 1960s they had developed a number of proprietary bow making processes that gave their bows exceptional speed, accuracy, and broadhead penetration.  They also developed long risers and sight windows that were somewhat revolutionary and allowed a draw length up to 31” without stacking. Because of the speed and penetration of the Staghorn XP, it became a bow of choice among serious bowhunters. Because of their European connections, Staghorns became a popular bow brand in Europe. It’s reported that the Finnish Women’s team shot Staghorns in the Olympics.  When compounds began to take over the archery world in the mid 70s, Staghorn, like most of the other traditional recurve companies, suffered greatly. Staghorn never ventured into the compound market.  The company was sold in 1982.  William Pyle passed away in January of 2006.  Staghorn survives today as a custom recurve operation run by Gwynedd Saddlery in Pennsylvania.

Staghorn used the finest materials and craftsmanship.  They were also among the most expensive bows on the market. The 1966 lineup of Staghorn bows included the: