Established by Luis (Lou) Edward Stemmler, Stemmler Archery was one of the first, and perhaps oldest, archery companies in the United States.  Luis acquired the business from his father.  Lou Stemmler was reported to have been a very good archer himself, although it is not known if he ever competed in many archery tournaments. The company was located on Long Island, New York.  The archery business dates back to at least 1912.  Stemmler produced all sorts of archery equipment, including bow making materials, English style long bows, arrows, and broadheads.  He was at that time the largest manufacture of archery tackle in the USA.  The 1920 Stemmler catalog included bow making materials, strings, points, broadheads, feathers, arrow shafts, arm guards, quivers, tabs, shooting gloves, as well a a line of lemonwood, yew and osage longbows. In the 1930s Stemmler also produced a line of Turkish and Persian bows.

In 1942 Luis wrote his classic book “The Essentials of Archery – How to Use and Make Bows and Arrows”.  The first bow that Fred Bear ever made was from a bow stave purchased from Fred Kibbe, a Stemmler protégé. Stemmler is reported to be the supplier of the staves for Fred Bear’s first lines of bows. The Stemmler factory was destroyed by fire (suspiciously) in the late 1970s, and was not rebuilt. Stemmler resurfaced with operations in Middlebury, CT.  It is thought that Stemmler had two levels of production. One was an inexpensive line of bows and wooden arrows for youth groups and schools, and a second line of higher quality recurves, many of which were special orders from sporting goods stores.  Stemmler did venture into the compound market before going out of business, but not until 1977.

The 1960 Stemmler catalog featured low-end Lemonwood and fiberglass bows.  The mid-1960s lineup added composite recurve bows such as (from high to low end) the Persian, Mogul, Turk, and Tartar.  In 1967 the Persian was dropped for a year, and the Saber added. The line also received a styling makeover.  Stemmler did not really venture into the high-end tournament target bow market, although the Persian was marketed as a tournament bow.  In 1972 Stemmler the Monarch (field), Stalker (hunting), and Saber (all-purpose) models were introduced.  In 1975 Stemmler introduced a new model recurve, the Six-Sixty target bow, at a time most archery companies were either going out of business or transitioning primarily to compound bows.  Finally, in 1977 Stemmler ventured into the compound market with two models, the Silencer and Stag.  In 1978 they introduced another compound model, the SLX-7, as well as a take-down recurve, the SPB-1.  The remaining recurve models included the Stalker, Jaguar, Squire, Varsity, and several fiberglass kids bows. 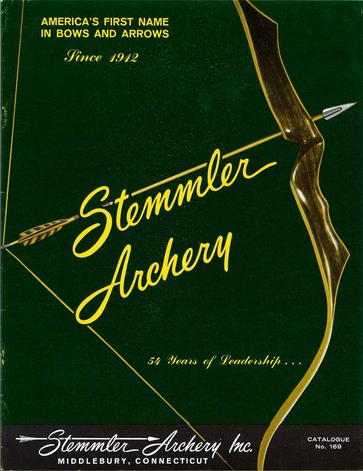