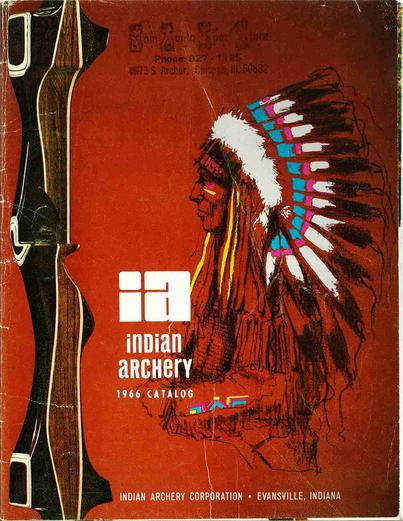 Early History:  Founded in 1927, Indian Archery and Toy Corp. operated as a small but thriving enterprise for nearly four decades.  The company was founded by a former Ohio resident named H. M. Brading, who enlisted the financial support of three Evansville car dealers to start his small business. Initially, Indian Archery and Toy focus largely on archery equipment, but also made and sold "toys" such as "bat-minton" sets, darts, dart games, and stilts through catalogs and jobbers. In 1928, there were 22 employees assembling bow and arrow sets by hand and shipping them as far away as Switzerland, Denmark, Australia, New Zealand, and China.  The Great Depression stunted, but did not kill, Indian Archery and Toy's growth. The company struggled throughout much of the 1930s, its business severely crimped by the reluctance of many consumers to spend their dwindling dollars on recreational products. By the end of the decade, however, the economic climate began to improve and Indian Archery and Toy once again thrived. Larger offices were occupied by 1937, when fiberglass bows were introduced and the company began manufacturing its own targets.

Post-World War II Transformation: After the war, Indian Archery and Toy experienced years of steady growth. The decade of the 1960s began with a name change, effected in 1961 when Indian Archery and Toy Corp. shortened its name to Indian Archery Corporation, one year before the company's 35th year of business. During the company's anniversary year, when sales reached $800,000, new management took the helm, led by Robert Griffin who would spearhead Indian Archery's eventual transformation into Escalade. Griffin immediately began experimenting with new products that would extend the company's presence into new markets.  Famed archer and bowhunter "Buddy Waston", who was also a bowyer, was hired in the 1960s to design new bows and help promote Indian Bows!  Sears & Roebuck Department store sold Indian Bows and had posters of Buddy Waston and his achievements with Bow & Arrow hanging in their sporting goods department.

Mergers and Diversification: One of the different business lines included the table-tennis market. While Indian Industries was attempting to make a name for itself in the golf-cart business, Sears, Roebuck & Co. approached the Evansville manufacturer about making table-tennis tables. With his golf-cart business floundering but with the metal-working operations still under his ownership, Griffin confided later, "We decided to go for it [the Sears offer] because we were already set up for tubular metal working and stamping. So we started from scratch and that worked for us." The deal marked the beginning of a lasting relationship with Sears and the first significant achievement realized by Indian Industries' new owners.  Once the company entered the table-tennis manufacturing business, it quickly sought to increase its presence in the market, as it embarked on a development program that would eventually make it the largest table-tennis manufacturer in the world. Toward this end, Indian Industries entered a joint venture project called Cal-Dana to manufacture table-tennis tables in California and Indiana, which was merged into the company in 1970, and acquired the trademark "Ping Pong" from Parker Bros. Shortly after these deals were completed, the paths of Indian Industries and The Williams Manufacturing Company joined together. The result was Escalade, Incorporated.  As of this writing, we do not know when Escalade discontinued the Indian Archery line. There is some thought that Indian Archery became the XI bow brand, which lasted into the 1990s. The current Bear and Trophy Ridge archery companies are also Escalade Sports company holdings.

The 1957 Indian Catalog featured a number of Lemonwood and fiberglass bows, along with arrows, accessories, and kids archery sets. In 1959 Indian introduced composite bows, including the Targetmaster and Gamester.  In 1961 Indian introduced 3 laminated recurve bows, the Seneca, Warrior and Commanche.  In 1962 the Sioux, Savage, Iroquois and Seminole models were introduced. In the mid-1960s the Cheyenne tournament target bow was introduced, and the Commanche, Iroquois, Sioux and Commanche became popular target bows. The Stalker, Mohoawk and deerslayer were popular hunting models.  In 1966 the gorgeous 100 laminations Tecumseh model was added ($130).  In 1972 Indian dropped their tournament bow line and produced only hunting, all-purpose, and kids bows, including the Stalker, Mohawk, Hawkeye, Deerslayer, Magnum Hunter, and Big Horn. The Hunter, Seneca, and Warrior models became the low-end all-purpose line.  The Deerslayer II take-down was introduced in 1975.