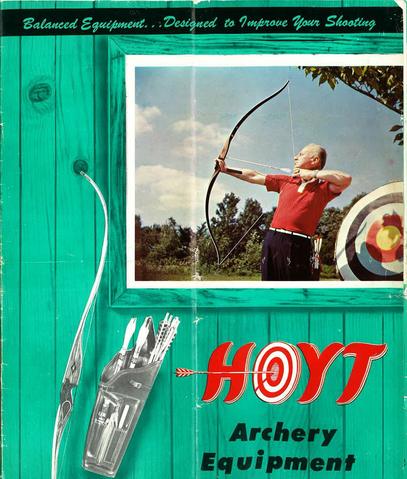 Experts vary as to when the Hoyt Archery Company was actually founded. Some report that Hoyt was founded in 1931 in St. Louis, MO with Earl Hoyt Sr. and his son producing hand-made cedar arrows and wooden bows.  Others believe that it was in 1942 that Earl convinced his dad to go into the archery business with him under the name of Hoyt Archery Company.  Notwithstanding, the first major breakthrough was in bow design, introducing in 1947 dynamic balanced limbs and limbs of equal length.  Hoyt was among the first to use deflex-reflex bow design. He then began designing bows with a semi-pistol grip, and in 1956 the full pistol grip. He later added stabilizers.  The archery industry relied upon Earl’s expertise many times while he served as a member of the Standards Committee for the Archery Manufactures Organization and while serving as president in 1964.  His famous target bow, the Pro Medalist was used by archers Doreen Wilbur and John Williams to win gold medals in the 1972 Olympics, the first year that archery was added back into the Olympic Games after many years.

Hoyt never did produce a large line of vintage recurve bows.  In the mid-1950s, the Hoyt lineup consisted of only three models: the Pro OIympian target bow, the all-purpose Pro, and the Champ II hunting bow. From 1964 through 1970 the Hoyt line included only the Pro Medalist and Pro Custom target bows, the Pro Hunter hunting bow, the XPert all-purpose bow, and the Scout entry-level bow.