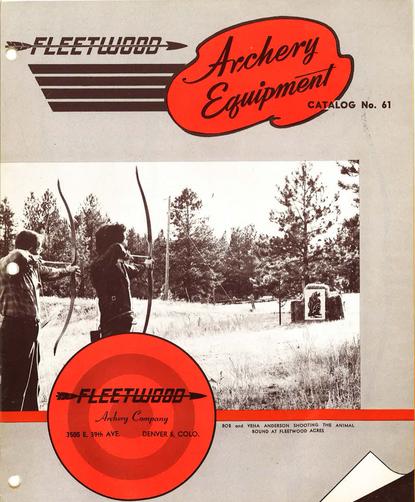 In 1928 Clarence Love turned his passion for archery and the building of bows into a full time business.  He famed his company Fleetwood Archery. The original office and workspace for Fleetwood Archery was in the kitchen of their small home in Denver, Colorado. Clarence  and his wife Irma grew the business focusing on archery products that weren't available at the time. Soon they moved the business out of the kitchen and into a small warehouse where they built longbows and recurve bows, fletched arrows, and manufactured quivers, armguards, gloves, tabs, fletching tools and even broadheads.

Fleetwood sub-contracted with the A.R. Amundson Products Company of Superior Wisconsin to make some of the items that were not made in the Fleetwood shop in Denver. Fleetwood, either on their own or through their contract with Amundson, manufactured all of their archery products which were distributed throughout the country by hardware and sporting goods jobbers.  They also did direct catalog sales.

.  Outers then acquired Astro Bows Inc.  The Astro line used some of the old Fleetwood tooling that had been used to make their recurve bows.

Like many early bowyers, Clarence made his early (1940s and 1950s) bows out of Lemonwood (Degame). He named his top line bow The Fleetwood. He also produced the Master, Champion, Marksman, and Collegiate.  He also produced a working recurve bow and the Par-X bow an aluminum alloy bow that he claimed shot better than wood. His also made a few "Take-a-Part" models such as the Royal and Chieftan. He then  added the Paul Bunyan series of solid glass bows.  In the late 50s and early 60s, Fleetwood began building laminated recurve bows such as the Westerner and the Town & Country.  The top of the line Fleetmaster was added in 1961.  In 1962 the Medalist was introduced as the newest top of the line bow at $75.00.  The Mountaineer was also introduced in 1962.  In 1963 the Medalist tournament was redesigned with wings and a Rosewood riser for $125.  In 1965 the King and Queen models wer added to the Fleetwood tournament bow line.  By 1968 Fleetwood had dropped their tournament bow line and focused on hunting, all-purpose, and recreational (camp) bows. The Hunter (in 60 and 564 inch models became their flagship hunting bow.  However, in the early 1970s Fleetwood brought back the King model tournament target bow.