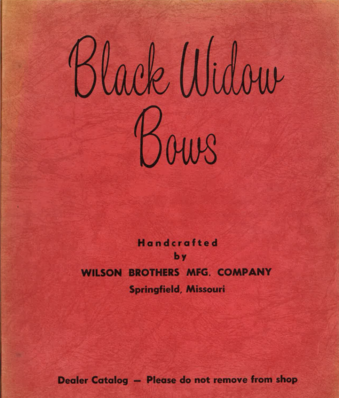 The three Wilson brothers (Norman, Jack, Robert) and other family members were noted tournament archers based in Missouri. They began building bows for friends and fellow archers in the 1940s. Deciding to form a bow building business post World War II, they began production in 1946. In 1957, the company launched the Black Widow brand name, building primarily target grade models. Sales grew until the coming of the compound, and in 1976, the family exited the business, but rather than closing the doors, sold the company to an employee.  Today, vintage Black Widow bows are highly coveted and command higher appreciated values than most any other vintage bow brand.

In the early 1960s, bow models were usually either TF (Target/Field models), or HF (Hunting/Field models).  This generally related to the length of the bows. Target bows were available in 62" to 68" lengths, while the hunting bows were 58" to 62" models.  Later, hunting bow models were designated with just an "H" before the model number.  Usually, the higher the model number, the higher end the bow was. Popular mid-1960s Black Widow bows were available in either Walnut or Rosewood, with the Rosewood models costing $10-$15 dollars more.  Target bows featured white glass and hunting bows brown glass.

Wilson Brothers also produced the Wilson finger tab, which was the choice of many tournament archers in the 1960s.  They also produced the poplar powder pouch which made it easy for archers to dab talcum powder on their tab to for a slicker release.  (Note: The VintageArchery.Org founder used both of these products during the 1960s.)