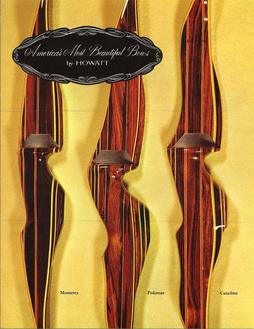 Some day we'll separate the Martin and Howatt page into separate pages, but because Martin and Howatt were somewhat "joined at the hip", for now we'll leave them together.  Both companies were located in Central/Eastern Washington State.  In 1976 Martin Archery purchased the Damon Howatt Archery business  Gail Martin had long admired Damon Howatt bows, and the first new bow he ever purchased for himself in 1949 had been a Howatt.

Damon Howatt (1904-966) became interested in archery in the late 1930's.  As most bowmen of the era, Damon made all of his own bows and archery accessories (including Broadheads) as a hobby.  In 1943 Damon decided to turn his bow making hobby into a full time business.  His first bows were static tip yew bows with sinew backing.  In the 1950s, Damon began producing quality recurve bows... and during the 1960's Damon Howatt bows became some of the most desirable shooting bows produced by anyone.

Howatt's early models gradually standardized into a line of target and hunting bows, often with colorful “California” names such as the top of the line target bow Del Rey that in 1960 sold for 3 times the price of a Bear Kodiak. One of the earlier hunting bows was called the Howatt Hi-Speed. In this case, the title was apt as Howatt’s limb and riser designs were noted for exceptional arrow speed.

Howatt was also an early proponent of target bow risers carefully constructed with horns, wings and sweeping angles all meant to keep the bow stable in the hand and deliver a dead-vibration free release.  Howatt’s early target models included the Monterey, Palomar, Del Rey and Ventura.  Hunting models included the Hunter (a short Ventura), the Hi-Speed, Hunter, and the Mamba.  Damon retired from daily bow making in 1963, turning management over to a local young rancher named Larry Hatfield who had been helping make bows on the weekend. Three years later in 1966 Damon Howatt was killed in a car accident.  Ten years after that the company was sold to Martin Archery.  Some years the Howatt models were cross-branded, such as “The Martin Hunter by Howatt” or just Martin Hunter. Regardless, the bow remained essentially unchanged.  Today all Martins and Damon Howatts plus a closely guarded number of trade bows made for other companies are built in the Damon Howatt facility at Martin’s HQ in Walla-Walla, Washington.

In 1951 Gail Martin started an archery manufacturing and wholesale business. At that time it was called Blue Mt. Archery, but the name was changed to Martin Archery three years later. During that time, he designed string and fletching equipment.  The initial Martin's Archery catalogs featured no bows.  Arrows and accessories were the bulk of initial Martin Archery sales, but in time bowstrings became the product that proved most profitable.  It was a string-making machine Gail developed that solved the stretching and unraveling problems so common in the day.  Gail sent a sample Gail of his strings Fred Bear, which landed him a long-term contract supplying Bear Archery with bowstrings in the 1960s and 1970s. During this same period Martin also built strings for Browning, Wing, Jennings and Allen bows, producing more than 7,000 bowstrings daily during peak production periods.  In the mid-1960s Martin began selling five (5) Martin branded Howatt made bows. 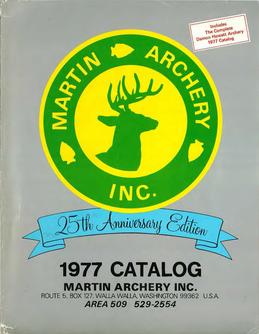