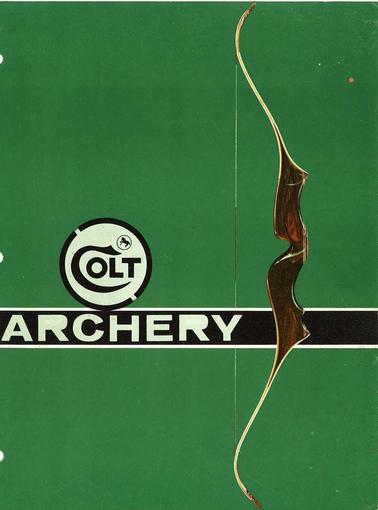 Colt's Firearms was founded in 1855 by Samuel Colt.  Colt was known for the engineering, production, and marketing of firearms, and became a dominating force in the firearms industry.  The Colt 45 and the Peacemaker were known worldwide during the wild west days.

Colt sold bows with the Colt Firearms logo but they did not set up a factory or make archery equipment themselves. Most bows sold by Colt were made by either Wing (Bob Lee) or Ben Pearson, generally Wing in the early years, and Pearson later.  For example, the Colt Heritage is the same bow as the Ben Pearson Cobra, and the 1967 Colt Arrow Master is the Pearson Javelina except with different wood (Olla for the Javelina, Imbuia for the Arrow Master).  Colt also put their logo on cedar arrows made by Ben Pearson and others and sold those as well.  If you look at a Colt catalog, you'll see many of the accessories for sale pictured with Ben Pearson bows, such as the Palomino.  In the early years, Colt bows were made by Wing.  Later, Ben Pearson was awarded the Colt contract.  The way to tell is this: If it was made by Wing, It will have Colt Firearms, Hartford, Connecticut logo written on the belly of the bow limb. If the city and state aren't shown on the limb, it is a Pearson bow.

Colt operated its archery division from 1962 until 1967, and never ventured into the compound bow market.

Note: Additional contributions to the history of Colt Archery are welcome. Send to info@vintagearchery.org

BACK
NEXT
View on Mobile